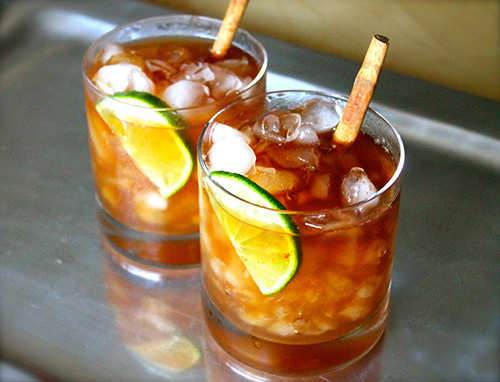 Tid Bits of Trivia Involving Rum or Rhum and a Rum Recipe or Two:

Depending on exactly who was running and where they were running determined the quality of the rum. The fare warning came down to the quality of the exact spelling though in the times of prohibition one can truly doubt that spelling was a problem as long as the liquor came through.

Rum as many of us would refer to it is a distinguishing name in French-speaking locales that indicates it is made from molasses versus Rhum which would be made with fresh sugarcane juices.

The best part for us is that it is here and it comes in many forms, qualities and characters.

To make a Quick Irish Crème

In a blender, combine all ingredients. Pour into decorative bottles for gifts. Makes 5 cups. Keeps for 1-month in the refrigerator. Shake well before serving.

Serve in a 12-ounce Whiskey Glass decorated with green straws, green cherry and green stick candy with a healthy serving of whip cream decorating the top.

There is always a way to celebrate an eternity with rum. Each season, holiday or occasion deserves a good Rum and an even better way to serve or try it. Share yours with Quality Liquor Store Today.